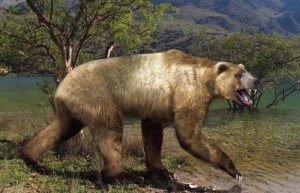 Stephen Wroe through the use of finite element analysis concludes that *Agriotherium africanum had the strongest bite of any known terrestrial animal.
credit – BBC Nature UK

Its skull and shearing type of teeth indicate a highly carnivorous way of life. Its eye sockets are set wide apart and face forward, giving it excellent vision. Its short, broad snout had a huge nasal passage, which probably means it had a keen sense of smell and could inhale great volumes of oxygen while pursuing prey. The large width of the jaws in relation to their shortness, plus the huge insertions for biting muscles, gave this bear a vise-like killing bite and the ability to crush bones to obtain marrow. Tests of bone samples show a very high ratio of nitrogen-15 to nitrogen-14, a nitrogen “signature” that indicates a true carnivore. Everything considered, paleobiologists conclude that the giant short-faced bear ate only meat.

Giant short-faced bears lived in Minnesota and the open country west of the Mississippi River and north to Yukon and Alaska. They probably scavenged and preyed upon large herbivores such as bison, muskoxen, deer, caribou, horses, and ground sloths. Their disappearance is linked to changes in habitat that led to the disappearance of some of these large herbivores at the end of the Ice Age.

A close relative, the lesser short-faced bear (Arctodus pristinus) lived near the Atlantic coast and in Mexico. This smaller bear with its longer face and smaller teeth may have been more omnivorous. It may have died out due to competition with a large Pleistocene subspecies of black bear (Ursus americanus amplidens) and due to brown/grizzly bears (Ursus arctos) invading from the west near the end of the Ice Age.

The only living relative of the short-faced bears is the spectacled bear (Tremarctos ornatus) of South America. It is omnivorous and the size of a black bear.

How big was this Short-faced Bear?

He could reach 2 ½ to 3 feet higher with a paw than he could reach with his mouth. This skeleton measures 72 inches from the center of the shoulder blade to the tips of the toes (adding 2 inches for the missing claws). 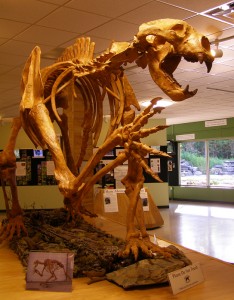 Subtracting 42 inches from the center of the shoulder blade to the tip of the nose, this bear could reach 30 inches above his up-stretched nose—to at least 14½ feet. If he rotated his shoulder upward a few inches, he could reach even higher. Ice Age campers had to hang their food higher than campers do today.

He weighed about a ton.

Archeologists estimate most giant short-faced bears, including females, to weigh 1600 to 1900 pounds. Some estimates exceed a ton. This large male specimen probably weighed close to a ton.

More information about the Short Faced Bear of North America:

North American short-faced bears, (Arctodus simus and Arctodus pristinus), sometimes picturesquely called “Bulldog Bears,” were the largest land carnivores in North America during the Ice Age (Quaternary the last two million years). They were unusually tall and highly carnivorous. They ranged from Alaska and the Yukon to Mexico, and from Pacific to Atlantic coasts.

Of the two North American short-faced bears, the giant short-faced bear (Arctodus simus) was the largest (Figure 1) the biggest known skull being from the Yukon. This bear is distinguished from the lesser short-faced bear (Arctodus pristinus) by larger size; bigger, broader, more crowded teeth; a shorter face and relatively longer legs. The largest animals were nearly 1.5 m high when walking normally, but stood about 3.4 m when up on their hind legs. They could have had a vertical reach of more than 4.3 m about 1.2 m above a basketball hoop!

Although much taller than brown bears (Ursus arctos), giant short-faced bears were not so heavily built (Figure 2). Their limbs, particularly the hindlimbs, were longer and more slender. A calculation of the autumn weight of a giant short-faced bear (with its full component of fat), based on diameter of the upper hind leg (femur) shaft, is approximately 700 kg. The largest known polar bear (Ursus maritimus) recorded in Canada, weighed 660 kg.

A prehistoric South American giant short-faced bear tipped the scales at up to 3,500 pounds

A prehistoric South American giant short-faced bear tipped the scales at up to 3,500 pounds (1,600 kilograms) and towered at least 11 feet (3.4 meters) standing up, according to a new study.

The previous heavyweight was a North American giant short-faced bear—a related extinct species—that weighed up to 2,500 pounds (1,134 kilograms). The largest bear on record in modern times was a 2,200-pound (998-kilogram) polar bear shot in Alaska in the 19th century.

The South American giant short-faced bear roamed its namesake continent about 500,000 to 2 million years ago and would have been the largest and most powerful meat-eater on land at the time, scientists say.

As meat-eaters go, “there’s nothing else that even comes close” during the time period, said study co-author Blaine Schubert, a paleontologist at East Tennessee State University in Johnson City, Tennessee.

“It just blew my mind how big it was.”

The bear skeleton, found in Buenos Aires Province, Argentina, in 1935, was recently reexamined by Schubert and study co-author Leopoldo Soibelzon, a paleontologist from Argentina who specializes in South American fossil bears.

By measuring its almost elephant-size humerus, or upper arm bone, the team was able to calculate the size of the rest of the bear’s body, Schubert said.

Their analysis also revealed that the animal was an old male that had endured several serious injuries throughout his life.

Less certain, however, is what and how these bears ate—and why they were so different from their North American cousins, Schubert noted.

In South America, Schubert suspects, a glut in prey and a lack of competition combined to make the bear king of the continent. But as more meat-eaters evolved, short-faced bears adapted, becoming smaller and more omnivorous, like the modern-day black bear.

In North America, the short-faced bear’s increasing size may have offered an advantage—its sheer heft may have scared off saber-toothed cats and other predators from their kills, the researchers speculate.

And the short-faced bear’s reign in North America would have also coincided with an explosion in Ice Age megafauna, such as giant ground sloths, camels, and mammoths—all potential new food sources.

“We had an Africa here,” Schubert said, and “it’s gone now.”