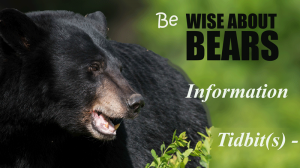 -A bear is an omnivore, however it is classified as a carnivore, yet the black bear is primarily a vegetarian.
-Very intelligent mammal. Intelligence rivals that of the great apes.
-Extremely acute sense of smell. Scent oriented mammal.
-Good eyesight, similar to humans, bears see colour.
-Cubs stay with mother for minimum 1.5 years.
-Cubs learn by following mother, mimicking her actions and activities. 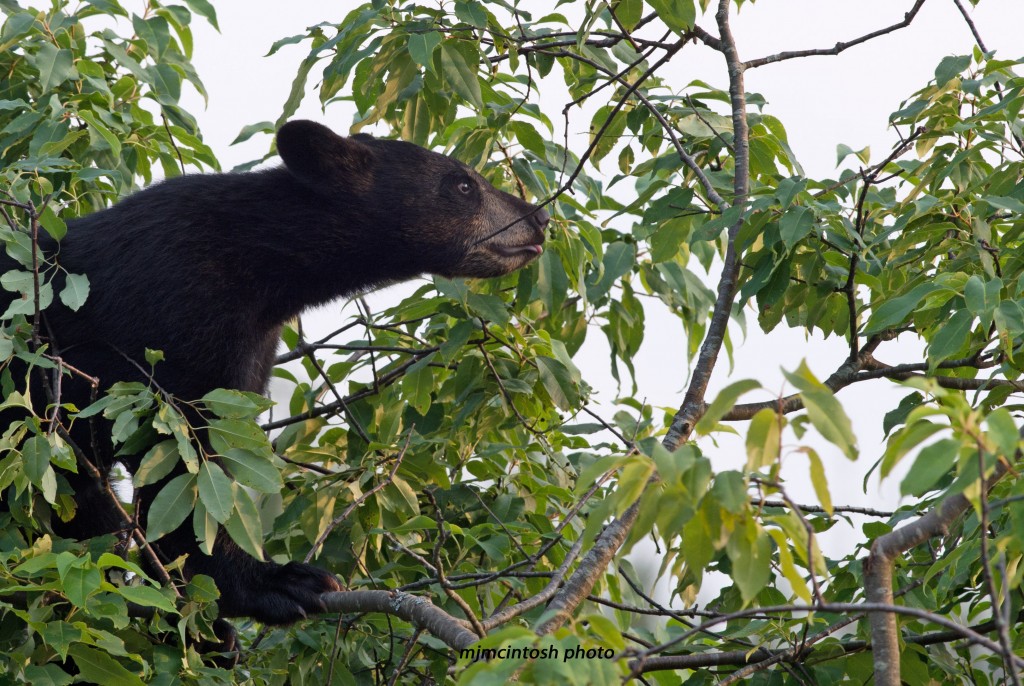 Bear: The Species and its Place
A bear is an animal that is a bundle of walking contradictions: a carnivore (classification) that lives primarily on vegetables, a hibernator that does not hibernate, a big animal whose claws turn out to be useful primarily as fingers. But though all this serves us well as a general description of bearishness, it does not tell us very much about the spirit of the animal. For that we must turn to literature, perhaps John Muir: “He made a telling picture standing alert in the sunny forest garden. How well he played his part, harmonizing in bulk and color and shaggy hair with the trunks of the trees and lush vegetation, as natural a feature as any other in the landscape. . .  We stood staring at each other in solemn silence within a dozen yards or thereabouts, while I fervently hoped that the power of the human eye over wild beasts would prove as great as it is said to be. How long our awfully strenuous interview lasted, I don’t know; but at length in the slow fullness of time he pulled his huge paws down off the log, and with magnificent deliberation turned and walked leisurely up the meadow, stopping frequently to look back over his shoulder to see whether I was pursuing him, then moving on again, evidently neither fearing me very much nor trusting me. He was probably about five hundred pounds in weight, a broad, rusty bundle of ungovernable wildness, perhaps I should like to know my hairy brothers better”. -My first Summer in the Sierra, 1911 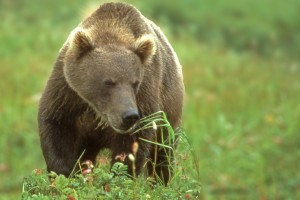 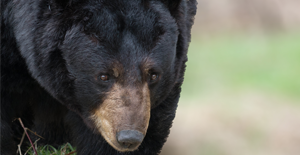 Bears inhabit a sensory world that is fundamentally different from ours. We are sight oriented animals, depending principally on the extremely fine discriminatory vision. Bears are scent-oriented: they determine their path through the world largely by determining what it smells like. For all mammals, the acuity of the sense of smell depends primarily upon the size of the olfactory mucosa, a specialized area of mucous membrane located in the nose. In humans, the olfactory mucosa normally totals less than a square inch in area. In the average bear, it may be one hundred times that much. If the wind is right, a bear can smell you coming when you are still over a mile away. “A pine needle fell in the woods”, goes an ancient Native American saying. “The eagle saw it. The deer heard it. The bear smelled it.” Despite its strong reliance on its nose, however, a bear’s other senses are as good as or better than our own. Bears can pick up the sounds of normal human conversation over a distance of nearly a quarter of a mile, and will usually come alert at the click of a camera shutter half a football field away from them. Their hearing, like that of a dog or cat, appears to range well up into the ultrasonic frequencies (blowing one of those “silent” dog whistles in bear country is probably not a particularly good idea). Their vision is also acute. This flies in the face of popular wisdom, but it happens to be true. Their shape and color recognition ability is excellent, better than that of chimpanzees and other close human relatives.

The Concept of Niche –  The concept of the niche is central to the science of ecology. The term refers to bodies home and to its job: that is, both to its physical place on the planet and to its functional place in the intricate web of relationships that keep the ecosystem it is a part of ticking smoothly along. There are thousands upon thousands of niches in each ecosystem, all of them subtly (or not so subtly) different from one another. Two organisms cannot occupy the same niche at the same time and place because the better-adapted of two will always dominate the less well adapted one, either driving it to another niche (competitive exclusion) or eliminating it altogether (extinction). The difference in adaptiveness does not have to be very great to be effective. Black bears are forest dwellers largely brown bears (grizzlies) have competitively excluded them from open terrain, and in those places in the North American west where grizzlies have been exterminated a few blacks have begun to take that part of the niche back, colonizing what was formerly exclusively grizzly turf. Short-faced bears have been totally eliminated from North America largely because the Ursids – the blacks and grizzlies and polar bears – are marginally more successful at being bears. 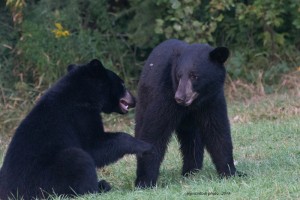 In order to make sense of the extraordinarily complex and tangled web that is the niche system in even the simplest of environments, ecologists use a classification method that categorizes organisms by their trophic levels, their places in the food chain. At the bottom are the producers, the green plants and other organisms, such as algae and some bacteria, which can turn simple elements and sunlight into the complex compounds that are necessary for life. Above these are the first-order consumers, the organisms, primarily herbivorous animals, that eat the producers in order to obtain organics in a ready-made form. Second-order consumers eat the first-order consumes.  At the apex of the chain are the top carnivores, which are big enough and fierce nothing else eats them (although they may occasionally eat one another). As you go up the food chain, efficiency declines, so that a piece of land that supports 10,000 tons of producers may support less than a ton of top carnivores; this bottom-heavy phenomenon is known as the “pyramid of biomass”.  Tying the top of the pyramid to the bottom are the decomposers, the organisms, primarily bacteria and fungi, that break down the bodies of the dead and render them into elements again so that the producers can begin the cycle again. The problem with this tidy scheme is that it does not account for omnivores, which do not so much fail to fit into the system as ignore it.

Omnivores are opportunists, will happily feed on any trophic level, as readers may discover for themselves if they go feast upon a steak smothered in mushrooms with a glass of wine and a side order of salad.  A bear would enjoy that meal every bit as much as you would, and would probably take it from if it had the opportunity. 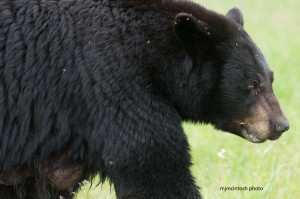 An omnivores niche – to mix sports metaphors a bit- is that of the pinch hitter. Whenever another animal falls down a bit on the job, or leaves its niche temporarily unfilled, the omnivore is there to take up the slack. The key to this niche is flexibility, and the key to flexibility is intelligence. An omnivore must be able to recognize opportunities for food, even when they come in unfamiliar guises. It must be able to adapt its diet to what is available, meaning that it must be able to conceptualize the idea of substitution: if you can’t catch the squirrel, you substitute the nuts in the squirrel’s storehouse. It must be willing to experiment with new foods and be able to carry out those experiments in ways that won’t harm it (discovering that a plant is toxic is of very little value to an animal that dies in the process of making this discovery). The animal must above all be able to learn easily, both from its own experiences and from the experiences of others of its kind. It must be able to build up a specific, individualized body of knowledge that is uniquely tailored to its own peculiar environment, the distinctive combination of biocenters and travel corridors that makes up what it has taken for its home,range. Instinct cannot be tailored this way. Generalized knowledge can be passed on by the genes, but specific knowledge must be taught. This intense need for learning colors everything about an omnivore, right down to the level of biological reproduction. 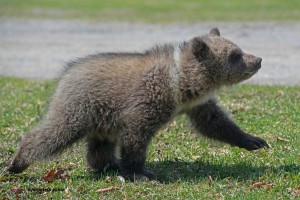 Ecologists categorize all organisms into one of two distinct groups, depending upon their, reproductive strategies. Most organisms are are referred to as r-selected. They produce large amounts of young and count on the law of averages to make certain that some of them reach adulthood. The chances of any given r-selected infant reaching reproductive age may be extremely small, but if the numbers are large enough to begin with somebody is going to make it, and thus the gene pool can perpetuate itself. This is the strategy used by most plants and most prey animals. The breeding rates of rabbits and guppies are perfect examples of the r-strategy in action. The opposite of an r-selected species is known as a K-selected species.  K-strategy organisms produce very few young, but they protect and nurture them so that a large  percentage of them reach .adulthood. They are not content to allow the law of averages to perpetuate the species. They want to skew the odds a little bit in their favor. Uncontested first place in the K-selected derby belongs to humans. Second place depends on where you are.  In Africa and tropical Asia, it is the great apes. In most of the rest of the world, it is the bears. The K-selected life-style affects just about everything in a bear’s life. It is responsible for the animal’s curiosity, its excellent problem-solving ability, and its apparently near-photographic memory. It has led to the development of an impressive array of data-gathering machinery, the extraordinary sensory apparatus, the delicate manipulative ability and of the cognitive skills and integrative capacity to put it all together. It has dramatically affected the animal’s life cycle, especially in terms of lifespan and child-rearing. Bears live a long time thirty to forty years, even in the wild, because short lives would waste all that learning and the gene pool cannot afford the loss. 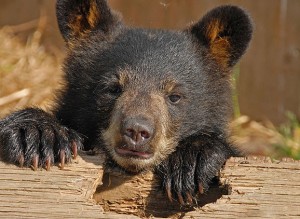 Bears reproduce extremely slowly because each generation must be taught as much as possible of what the previous generations have figured out, and that requires a lot more one-on-one, mother- and-child interaction than would -ever be -possible if the mother had to constantly be dealing with a brood the size of a rabbit’s. Bears are not born knowing how to be bears. Each cub has to learn the art for itself. Credits – text excerpts from a book entitled: Bears -Their Life and Behavior  by William Ashworth Published by Crown Publishers, Inc., New York, Information Tidbits by Mike McIntosh. Photographs:  Mike McIntosh